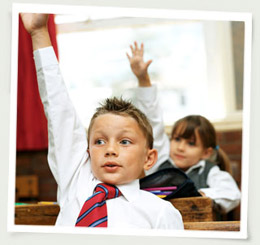 By the time your child is 6 years old, he has a pretty good understanding of your beliefs and values. At this point, values take on a different meaning. Your child begins pulling away from the family and spending more time with other children and adults. This association with others will have a growing impact on his behavior and attitudes.

Between ages 6 and 12, his conscience becomes stronger. Your child begins to pay more attention to the consequences of his behavior or misbehavior. He will make an effort to behave in order to avoid punishment. Children in this age range believe in obeying the rules, in fair play, law and order and having the same punishments for all kids when rules are broken. They still depend on adults for much of their moral guidance.

This is called the conventional stage of development. A child at this stage tries to do his duty, shows respect for authority, follows fixed rules and tries to maintain order.

Morality begins to have a deeper meaning as older children begin to understand that adults make mistakes, promises are broken and many questions cannot be answered with either "yes" or "no." Children may become very upset, even disturbed, when they see too many examples of immorality.

Children aged 9 to 12 have better reasoning and make decision based on their own view of society as well as their own sense of what is right and wrong. While your child may still mimic your own behavior, he also becomes more likely to challenge it. He also begins to compare your behavior to the behavior of his friends' parents.

By the time your child becomes a preadolescent, he has internalized a set of rules and moral behaviors. He is governed by his conscience.

BACK: « Value building begins at a very young age | NEXT: Teaching values to teenagers »

Join in our discussions:
+ Add your comment for Teaching Values To Older Children
▲ jump to top of article
Other Popular Posts