How to prevent birds from hitting windows

One possible explanation for why birds fly into windows is that they see a reflection of the outdoors, thinking they can fly right through. (When looking at the window reflections in these pictures, it's pretty obvious to see how this could happen.)

Another explanation is that, during mating season, birds see their reflection as a competitor that has to be fought off.

And if you're considering putting up bird feeders, waterers or bird houses, you're increasing the chances of bird-window collisions.

At our house, we'd had several casualties from birds flying into our window, so something had to be done. The challenges were that we have very limited carpentry skills, couldn't invest a lot of money, and didn't want to obstruct our view from inside the home.

Since most of our windows don't open, they can't accommodate screens. So, here's a photo of what we decided on:

At Lowes, we purchased:

Since this row of windows measures 16' wide by 6' high, we cut an 18' strip of the 7' wide netting and spread it out on the deck. To add stability to the top of the netting, we aligned 3 pairs of lathing along both the top and bottom of the netting, with the netting sandwiched between. The lath strips were then stapled together with dabs of Liquid Nails to keep the slats together.

We clamped the top of the netting onto our gutters with the spring clamps and tied each of the bottom corners of the net to a brick (to prevent the netting from blowing up onto the roof during heavy winds.) 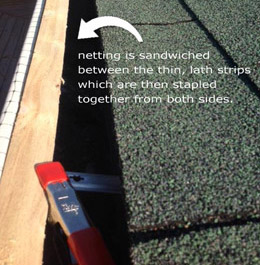 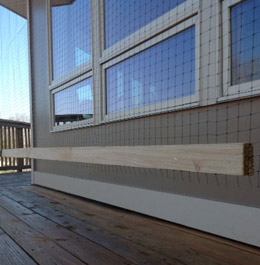 Photo on the right: We initially used the wood lath strips to lightly hold down the netting -- since this was more attractive than tying the net to brick anchors. Unfortunately, the lathing would bang against the house in high winds and still end up on the roof. And, while small screw-type anchors would be more attractive than the bricks, I'm afraid people would trip over the anchors and walk into the nearly unnoticeable netting.

So far, we've had no more bird collisions. And the netting is virtually invisible from inside our house.

If you have suggestions on how we could improve upon our efforts to prevent birds from flying into the windows, please share them in the feedback section below.

Join in our discussions:
+ Add your comment for How To Stop Birds From Hitting Windows
Showing comment(s)
Kiff
March 20, 2017
great advice! here is another approach from http://birdscreen.com for screening windows from the outside to prevent bird hits: 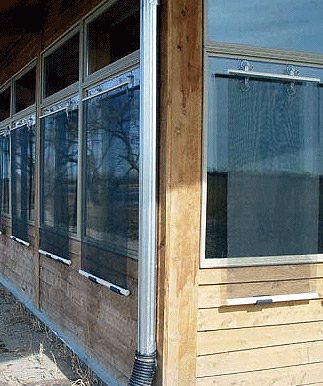 Otherwise, if you're a DIY type like I am, Amazon sells suction cups. Perhaps something like this one (that's an Amazon affliate link) may work well since it gets good reviews for the suction strength when used outdoor on boats... plus, the tie downs could hold the frame to the glass.

Please let us know what you end up doing.
Carl in Chapel Hill
September 11, 2016
One more question - Do you put this up in the spring and take it down in the fall or do you leave it up all year?
Rich at RaleighHealth.com
September 12, 2016
I've heard that migration and mating seasons are the worse for bird strikes but we seemed to have birds flying into the windows all throughout the year. Since the netting is so unnoticeable and the weather doesn't seem to damage it at all (it looks just like it did when we put it up years ago), we never take it down.
Carl in Chapel Hill
September 11, 2016
Have you ever had birds caught in the netting?
Rich at RaleighHealth.com
September 12, 2016
No, never. We have lots of birds around the house, sitting on our deck railing and drinking at the waterer but not a single one has come in contact with the netting -- that I am aware of. And the netting curtain has been up for over 2 years. Before that, it seemed like we were having birds strike the window regularly.
Janet
July 8, 2016
I love the simplicity & look of the final "screen." Can you be more specific on the type of netting used? (a brand name would be of great help to me) When I pull up wildlife netting at Lowes or Amazon, there are so many, it tends to overwhelm me. (I know... it's a personal problem).

Thanks for any advice you can share.
Rich at RaleighHealth.com
July 8, 2016
Hi Janet, Thanks for your message.
If this is not the exact brand, our netting looks identical to this one that I picked up at the local hardware store recently. 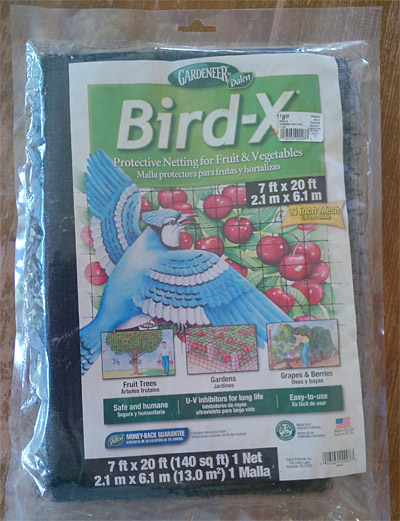 michelle
September 23, 2015
I have a problem with a kookaburra flying into my many glass sliding doors. Your solution looks like a good solution, but I believe the birds will still see their reflection and fly into the glass, and then get caught up in the netting.
Rich at RaleighHealth.com
September 23, 2015
Thanks for your comment. I don't know how kookaburras would respond but the large wall of windows you see in the photos above is directly in front of me as I work on the computer all day. So, I'd certainly notice if birds got hung up, even temporarily. Thankfully, I haven't seen birds come in contact with the netting even once, though they often sit on the deck railing just a few feet away.
For as 1) inexpensive as it is, 2) easy as it was to install, 3) effective as it has been and 4) well as it has held up (even though it is practically invisible from inside the house, the netting still looks like new... even after a couple years in the sun), it's been a wonderful solution for us.
Elizabeth
August 5, 2015
Do the birds see the netting? Or do they hit it instead? Just want to be sure I don't buy a netting that has the wrong spacing that they might get caught in. Some of the birds hitting my windows are hummingbirds. Thanks again for the great idea!
Rich at RaleighHealth.com
August 6, 2015
Hi Elizabeth,
Thanks for your message. We have an occasional hummingbird hovering around our deck... but I don't see nearly as many hummingbirds as songbirds.
In well over a year now, I've never once noticed a bird hit the netting... so they must see it... which is a tremendous relief. In the few months prior to hanging the garden netting, we had 4 or 5 goldfinch, bluebird and black-capped chickadee window strikes.
gs
April 3, 2015
This is a terrific, affordable, good looking solution. So excited to find it - thanks for sharing!
Rich at RaleighHealth.com
April 9, 2015
Thank you very much for your positive feedback, gs.
We couldn't be any happier with how this has worked out; not a single bird has hit the windows in 2 years now and the netting looks as good as the day we hung it.
Lewis
April 12, 2014
If you're concerned about overall cost and keeping weight to a minimum so that your gutters don't sag, have you thought of using plastic zip ties instead of metal spring clamps to attach the netting slats to the gutters?
Rich at RaleighHealth.com
April 14, 2014
That's a wonderful idea Lewis. The zip ties are so much cheaper, lighter and, i suppose, can be quickly cut off if the netting should have to come down because of high winds.
▲ jump to top of article
Other Popular Posts